Fantasy racing liveries have made their way onto diecast cars since well before real ones ever hit store shelves. After all, it’s a heck of a lot easier to let your graphics people follow their instincts than it ever will be to go license all of the partners whose logos appear on a real-life racer. Don’t forget the fact that it may have been difficult enough to get clearance just to produce a real-world chassis, or even earn permission to use an actual company’s logo, even in a fictional scenario!

But while there are tons of these cars out there, in all shapes, sizes, and series, the #fakeweek car is something different entirely. It’s not just an example of a fictional ride, it’s one whose producer went to great lengths to best approximate real-world liveries while avoiding almost all traces of actual companies. This allows the company to deliver a lifelike model while also positioning itself firmly in the category of “toys”—after all, you won’t see too many six-year-olds nitpicking about decals!

When it comes to toeing the line between these two pursuits, Realtoy is probably among the most prevalent via a number of different lines. Its Action City series is perhaps the easiest to find these days, but in the 1990s, they also produced a number of fakes as part of racing-themed playsets, including one that I had as a kid. Because the plastic models don’t have the brand name on the underside of the cars, it took me quite a while to figure out what I was looking for, but after a little sleuthing, I’ve managed to assemble what I believe is a full set of the brand’s 1990s Formula 1 fakes. 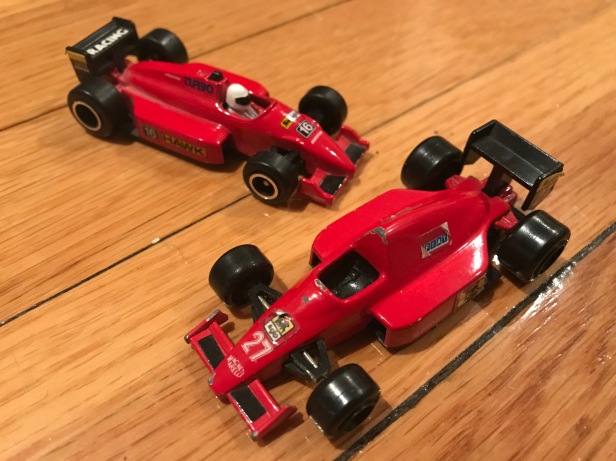 These F1 cars (as well as a handful of more recent issues) borrow the Japanese Tomica castings for late 1980s Ferrari and Williams F1 challengers; as such, they can sometimes go for high prices on eBay, but can just as likely be found for cheap at flea markets or from less knowledgeable sellers. It’s hard enough to find the real deal, especially at a decent price, and so mine are pretty beat, but they’re here for reference.

It’s no surprise, then, that knockoff Williams and Ferrari liveries appear on the Realtoy versions—but the catch is, they’re on the opposite cars! As in most cases, the numbers chosen for these rides as evocative, but not exactly, the ones featured on the real cars. For Williams, it’s a white 8 instead of a white 6 (or red 5), while Realtoy subtracted one from each digit on the Ferrari number to go from 27 to 16.

The other two cars on the Ferrari casting feature the liveries of colorful teams that nonetheless met their demise in the 1990s. The first borrows its colors and theme from the Footwork Arrows team that campaigned from 1991 to 1996, specifically its 1994 entry; using the number 10, it’s the only one to use a number from its real-life counterpart. Meanwhile, the strangely-numbered 63 car uses a schematic similar to Team Lotus’ 1993 ride, but with a brighter green than the true-to-life car. 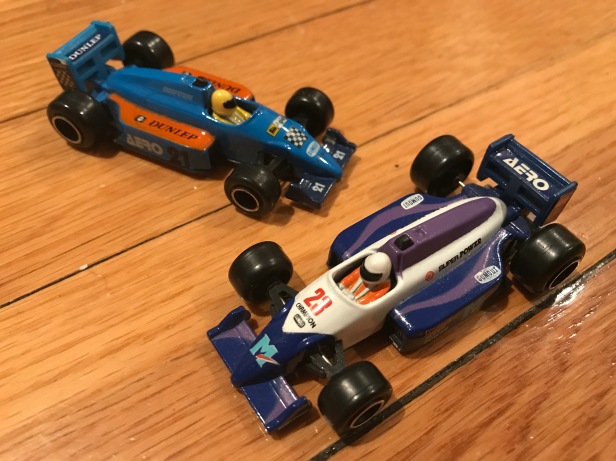 One of the Williams rides adds a splash of white to a Simtek-inspired ride, complete with fake MTV logos and the number 23 (a reversal of the 32 run by the late Roland Ratzenberger when he was killed in San Marino). Tracking down an accurate counterpart for the other, however, has proven difficult. Numerous F1 teams ran with blue as a primary color in the early 1990s, from Ligier to Lamborghini, Jordan to Tyrrell; but the best match I can conceive of is the 1994 Minardi that featured orange Beta Tools logos atop its sidepods and two shades of blue, but also sizable white spaces. Perhaps that’s where the extra white that made it to the Simtek knockoff went! 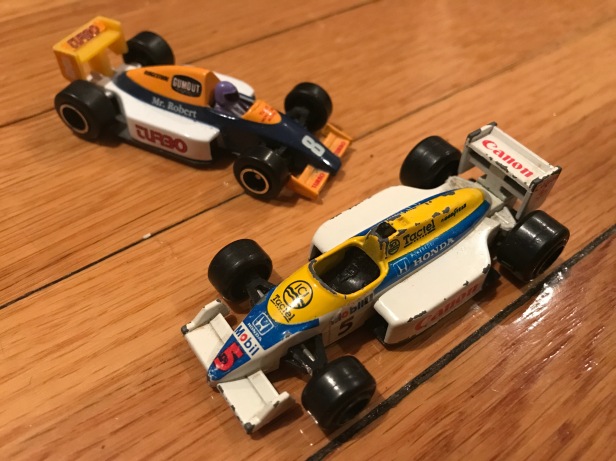 They’re not the most realistic models, and that’s by design, but that’s not as much of a knock on the Realtoy cars as you’d think. As the diecast market began to fade in the mid-1990s, finding F1 cars in 1:64 scale became harder and harder, with Matchbox pulling out entirely and the Microchamps lineup accommodating as few as a single team in some seasons. As such, this is the only chance to find something close to models of the Simtek and Minardi at this scale without building them yourself!