The 1992 NASCAR Winston Cup season, aside from featuring one of the most amazing finishes of all time when Alan Kulwicki nipped Bill Elliott for the title, was the first year that every full-time team made it to store shelves. Thanks to brands like Racing Champions, RCCA, Funstuf, and even Road Champs, there was no shortage of availability.

The next year, F1 responded with an increased selection of its own. Not only did Minichamps, best known for 1:18 and 1:43 replicas, expand its Microchamps line, but Matchbox also jumped into the fray by licensing a number of teams of its own. While some vehicles were issued in both lines, the selection was different enough to cover most of the top drivers in the series.

Of course, 1993 was a year of drastic transition for F1. After taking a sabbatical year in 1992, Alain Prost signed a deal to return to the sport with Williams, which had already been set with Nigel Mansell as its lead driver. Despite winning the 1992 championship, Frank Williams wouldn’t guarantee Mansell its lead driver status, so he jumped ship to IndyCar, while Prost would partner with Damon Hill.

Mansell, of course, would become the first driver to hold F1 and IndyCar titles simultaneously when he dominated the year with Newman/Haas Racing, and while Minichamps would issue Mansell’s new ride as part of its six-car IndyCar line, it was Matchbox that put out the commemorative sets featuring his iconic two-year stretch—fitting, as both driver and company were British! (Note that the Microchamps issue here was from 1992.)

The biggest difference between the Matchbox and Microchamps lines (other than the size!) was the intended audience. While the Microchamps cars were designed for the adult collector, screwed into their bases with fully detailed helmets, the Matchbox cars were no different from any of the company’s other offerings aside from the real-world graphics. As such, Matchbox only offered one of each team’s vehicles, forgoing each team’s second numbers. So while Hill, Ferrari’s Jean Alesi, and Sauber’s J.J. Lehto would see their cars immortalized by both brands, their respective teammates (Prost, Gerhard Berger, and Karl Wendlinger) would not.

The second biggest difference came in the quality of the teams each brand added to the mix. Microchamps added Benetton and McLaren, two of the sport’s frontrunners, to its lineup; this meant that both Michael Schumacher and Ayrton Senna would see their cars modeled at the highest level of detail. Schumacher was joined at Benetton that year by Ricardo Patrese, in his final F1 season, while both Michael Andretti and Mika Hakkinen would be included as Microchamps produced a special McLaren retrospective line of most of the team’s cars from the late 1980s and early 1990s.

Matchbox, meanwhile, centered on fun by licensing the Footwork team. The Japanese logistics company partnered with Arrows from 1991 to 1996, producing some of the coolest liveries on the grid (even if the 1994 car was superior to 1993’s look, in my opinion) and signing a mix of cagey veterans like Derek Warwick (who drove this car) and Christian Fittipaldi (who drove in 1994). I’ve also seen promotional photos of the 1993 Lotus raced by Johnny Herbert, but have been unable to track it down so far—although I do own the 1994 model that Herbert and Alex Zanardi shared. 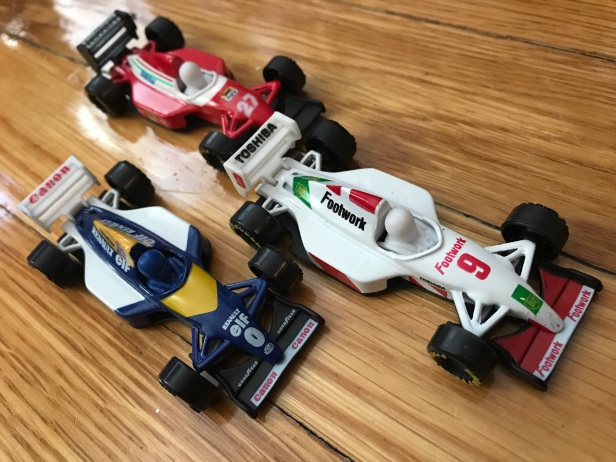 On the track, the championship was never really in doubt, as a rejuvenated Prost won seven of the first 10 races of the season and clinched the title with two races to go. Senna placed second despite concerns about McLaren’s new Ford powerplants, finally breaking Williams’ 15-race pole streak in the season finale in Australia. Microchamps produced the cars of all four race winners, while eight of the top 10 points finishers, and 11 of the top 13, were represented (assuming the Herbert car made it to production).